Atlantic Spotted Dolphin in the Bahamas 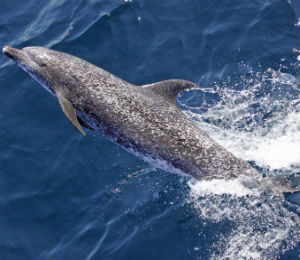 The Bahamas are home to beautiful beaches, spectacular sunsets and delightful sea creatures, all of which can be experienced during your visit to the islands. In fact, there’s so much to see in the water alone that we hardly ever want to leave! Participate in a scuba diving Bahamas trip, and you’ll see exactly what we mean. Come face to face with the most colorful coral reefs in the ocean that serve as a home, breeding ground and even hunting ground for thousands of species of sea creatures, and hundreds of different species of fish alone! You’ll find a variety fish, sea stars, sea turtles and even dolphins!

The Atlantic Spotted Dolphin is a beautiful and friendly creature that can be found in the warm waters surrounding the Bahamas. These dolphins are extremely social, building long-term bonds with their peers and associating with other types of dolphins during hunting and traveling. It is not uncommon for spotted dolphins to be seen with groups of bottlenose dolphins.

The spotted dolphin is also acrobatic and enjoys bow-riding -- swimming in the waves formed by a boat’s bow -- and leaping out of the water.

As an intermediate between species, the Atlantic Spotted Dolphin looks like a cross between a bottlenose dolphin and a pantropical spotted dolphin. The Atlantic dolphin has a slightly thicker body with a light grey underside and a dark grey back and sides. A light colored streak can be seen running the length of the dolphin’s sides, ending below its dorsal fin. The spots on the dolphin range in color, being dark on its light underbelly, and lightly colored on the darker areas of the dolphin. The spotted dolphin has a long beak with a sickle shaped dorsal fin.

Young Atlantic Spotted Dolphins are generally unmarked, or without spots, which can cause difficulties in identification. Many of the calves develop their spots with maturity, and some can become so covered in spots that they appear to be completely white at a distance.

And while the Atlantic Spotted Dolphin may be named so because of its spots, those that inhabit the offshore Gulf Stream waters can be completely unmarked and smaller in size.

As its name suggests, the Atlantic Spotted Dolphin is found throughout the warmer waters of the Atlantic Ocean and Gulf Stream. They can be found along the coasts in schools of 5-15, which have been known to be segregated by sex and age. Their schools can be found hunting and traveling from the coasts of Brazil all the way north to New England. They also follow the warm water currents across the ocean and have been spotted on the western coasts of Africa.

Squid, fish and other bottom-feeding sea creatures serve as the main course for Atlantic Spotted Dolphins. Because the dolphin can dive to depths of more than 60 meters and hold its breath for nearly 6 minutes, locating and snatching bottom-feeding invertebrates is a relatively easy task for them.

Want to look for the Atlantic Spotted Dolphin? Book a scuba diving-Bahamas trip and don’t forget your waterproof camera!