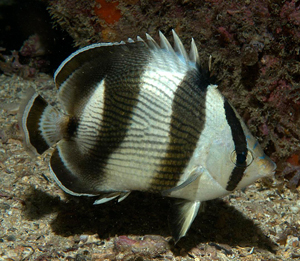 These spectacularly patterned fish often appear in idyllic underwater photospreads in publications like National Geographic and Conde Naste. If you’re really on the hunt for something bright, colorful and unique, these are definitely a species you’ll want to snap a few photos of in the Bahamas. The Four-eyed butterfly fish are what biologists call “deep-bodied and laterally compressed”. A single dorsal fin marks the top and they are characterized by a very small mouth, teeming with bristly teeth. Their body is a beautiful, silvery grey, and depending on where you are or the underwater environment, it can also have a yellow tinge to it with distinctive forward-patterned chevrons. This fish gets its name from the fairly large and noticeable dark spot at the rear part of the body. The spot is enhanced by a circular white ring that looks like a second set of eyes. And the black bar running straight up onto the head actually runs through its actual eye.

The complex pattern is believed to be a defence mechanism against predators. The false eyes at the rear make it difficult for a predator to determine which is the back and which is the front. When challenged, the Four-eyed Butterflyfish will place its falso eyes closest to the predator, because most predators go after the eyes of their prey first to debilitate them. If they are not able to flee from their predator, the Four-eyed Butterflyfish will lower its head and spines, making it look bigger and more threatening. This form of intimidation tricks the predator into thinking its just not worth the trouble!

These prickly, crafty creatures are often found perusing shallow inshore waters, so if you’re snorkeling, or just swimming, they’re easy to find. They feed on a wide selection of invertebrates like gorgonians, tunicates, polychaete worms, and zoantharians. You’ll find them swimming in and amongst the coral heads with great ease, and perhaps the most interesting fact is that they are one of the very few fish species that mate for life.