Diving in a Heavy-Walled Vessel 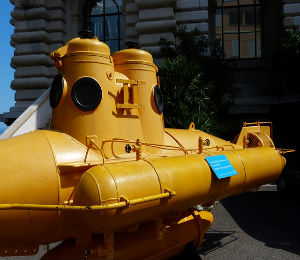 When planning a Freeport scuba dive, divers may want to learn more about the history and types of diving available. There are numerous styles of diving, from the most low tech such as free diving to the most high tech, such as modern diving suits or vehicles. Not all people who explore the ocean do so while swimming under their own power. Diving in a heavy-walled vessel is another well known way of exploring the ocean, and in fact these vehicles can reach deeper depths than divers alone. Submarines are the most famous example of this, though they are not the only heavy-walled vehicle used to shepherd divers down to the deep. Bathyspheres and bathyscapes are two more vehicles used to deep sea dive.

The bathysphere was designed in the late 1920s by Otis Barton specifically to help scientist and naturalist William Beebe more closely study the ocean. Though submarines already existed, they could not go very deep and they did not have windows. The first bathysphere was basically a round metal windowed vessel that could be lowered into the ocean. The windows were made of strong fused quartz and the circular shape was intentional, as spheres could more easily withstand the water pressure. It remained tethered to a mother ship, which could raise or lower it as needed. There were oxygen cylinders, soda lime and calcium chloride stored inside the sphere, all working together to keep the air breathable.

A bathyscape, also known as a bathyscaphe, is very similar. However, unlike the bathysphere, it does not need to remain tethered to a ship which controls its dive. Instead, it is attached to a float. It was designed about 20 years after the bathysphere by Auguste Piccard. To descent water is let into air chambers. To ascent, a metal shot is dropped from the vehicle, lightening it and allowing it to float upwards. In 1960 Jacques Piccard, along with Lieutenant Don Walsh, was able to take his father's vehicle down to the deepest point in the ocean, the Challenger Deep, which is located within the Mariana Trench. Piccard and Walsh were the first to ever reach that depth, and it took another 40 years before anyone was able to replicate their feat.

Then of course there is the submarine. There are many types and sizes of submarines and very primitive versions were being built all the way back in the 17th century. In 1775 the first submarine able to propel itself independently and attack an enemy ship was built by David Bushnell. Submarines were being used in warfare as far back as the Civil War, right around the time when their advancement began to enable them to move via mechanical means rather than human effort. The Whitehead torpedo, which subs would use to sink ships, was also developed around this time. Military subs were also used in both world wars and continue to be used by the military today. There are a smaller number of non-military submarines also in use.

While diving in a wet suit is more common today for recreational divers, heavy-walled vessels are still an important part of diving culture and history. Without them many significant scientific discoveries would not have been possible, to say nothing of their military value. These fascinating vehicles are yet another testament to human ingenuity.