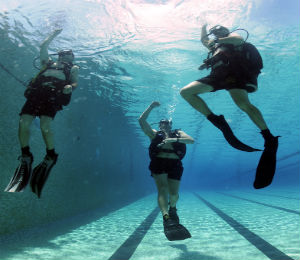 When it comes to going on a scuba dive Bahamas is one of the most popular locations for beginners and enthusiasts alike. However, even experienced divers might not realize how far back the roots of this peaceful and thrilling sport go. While it may be hard to believe, divers were using primitive equipment to aid in dives thousands of years ago.

While there is evidence of snorkeling as far back as 5000 years ago, and free-diving has surely been around for even longer, current evidence places scuba diving at only about 3000 years of age. There were two big challenges that plagued divers for thousands of years. One was simply how to carry or store oxygen while underwater, and the other was that even strong lungs couldn't withstand water pressure to take in breaths when more than a couple feet underwater. Luckily, human innovation found ways around both these limitations.

There is evidence that Assyrian divers at around 900 B.C. used animal skins filled with air to dive deeper and longer, arguably making them the first swimmers to use self contained air to aid in a dive. Another early innovation was the diving bell, which was invented in around 300 B.C. at the urging of Alexander the Great and allowed air to be held underwater for divers to breathe.

Other innovations came slowly. At around 1300 A.D. Persians were using very primitive goggles underwater, made by thinly slicing a shell and polishing it. About a hundred years later, Leonardo di Vinci drew up diving inventions that included air tanks and diving suits. By the 1500s diving suits had graduated from theoretical to actual, and divers in France and England were using leather suits with air tubes running to the surface. Those suits were gradually improved upon, including making helmets and air tubes metal to combat water pressure.

Inventors continued to improve upon diving suits in the 1700s. In 1771 John Smeaton invented the air pump, and a year later Sieur Freminet invented the first closed air device using recycled air. This invention was less than a total success, however, as Freminet died using it. He was not the last to sacrifice his life attempting to advance diving. American Charles Condert, inventor of another early self contained diving suit, also drowned in 1832 while using his suit. However, it was a beginning and 50 years later William James was able to invent another, more stable, suit that allowed enough air for 7 minutes of diving.

The next big innovation was recycled air devices. Henry Fleuss was one of the innovators, and invented the first widely used scuba system, which allowed divers about 3 hours of time underwater. Around the same time as Fleuss' invention came a diving suit equipped with its own air supply, invented by Benoît Rouquayrol and Auguste Denayrouze, but its rigidity and heavy weight made it impractical. Still, it is the forefather of the modern diving suit.

Decompression sickness was another hurdle to overcome. Dr Andrew Smith studied it in the late 1800s and John Scott Haldane, in the early 1900s, came up with tables of depths and times that divers could use to safely descend and ascend while avoiding the bends. Before this was studied divers did not know the danger of a quick ascend or descend or the affects it had on the body.

Innovations continued into the 20th century. The Mark V Diving Helmet came into use in 1917 and was used by the next 60 years by the US Navy. In the 1920s to 1930s fins, masks and waterproof goggles were all developed. Just 70 years ago Emile Gagnan and Jacques Cousteau invented their own suit and regulator, changing the face of diving. All of these inventions together created a perfect storm that enabled diving to go from a daredevil or military activity to one that anybody could enjoy.