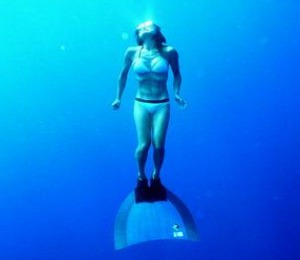 Whether diving in the Bahamas or in one of other countless beautiful locations worldwide, modern divers benefit from the accumulated knowledge and history of thousands of years of ancient diving. While divers today have scuba and snorkeling equipment to aid them, there is a long history of divers who braved the ocean without any breathing help at all. In fact, there is evidence of breath-hold diving going back thousands of years. Drawings, literature and ancient artifacts all hold proof of the existence of these brave men and women, who took their lives in their hands in order to dive to the bottom of the ocean and come back with aquatic treasures.

These ancient divers had diverse motives for what they did. Some dove to harvest sponges or to hunt for pearls. Evidence of these harvests are found in ancient jewelry and in records kept at the time. Ancient Greece, for example, used sponges in bathing. Weights would be used to aid divers in descending more quickly, giving them additional time to harvest.

Professional divers could go as deep as a hundred feet and stay underwater for several minutes. While exactly how long these ancient divers could stay underwater is unknown, we can estimate based on modern day free divers. For example, one diver by the name of Tom Sietas was able to break the world record in 2012 by holding his breath for over 22 minutes. This is with the aid of first breathing pure oxygen, but even so ancient divers likely were able to hold their breaths for close to 10 minutes at a stretch, enabling them to do their risky work.

However, the danger of getting the bends existed then as now, and free diving to these depths could be deadly for even an experienced diver. Another commercial use of free divers in ancient times was to recover as much salvage as possible from sunken ships, as there was no other way of getting back valuable sunken merchandise or equipment. Due to the danger level, divers were often allowed to keep a good percentage of what they recovered as pay. In Rhodes, an island off the coast of Greece, laws dating back to 1000 B.C. allowed breath-hold divers to keep up to fifty percent of any goods salvaged. There is written record of one such salvage diver in 480 B.C. who was named Skyllias and worked for the Persian king.

Others used their diving skills to serve their country or city-state. There is one well known story originally recorded by Herodotus in about 500 B.C. of a military diver who was able to escape his captives by diving off a boat and hiding from his enemies underwater. That diver returned later that night and cut loose all the enemy boats, causing them to float away and greatly helping his own cause. Though he most likely had a reed to enable him to breathe during at least the later part of his adventure, he clearly was able to free dive initially with enough talent to evade capture.

Though the invention of diving and snorkeling equipment has completely revolutionized modern diving, there are still some who choose to breath-hold dive, or free dive. There are even free diving competitions. AIDA International and CMAS are two organizations that host such competitions. Modern free divers still do so for commercial reasons as well. While more challenging than scuba diving in many ways, it is also freeing to be able to dive so deep and so long with no equipment at all.