Sperm Whales in the Bahamas 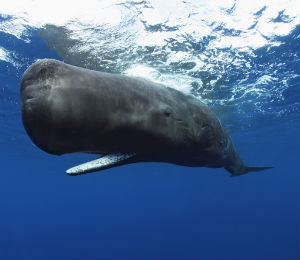 During a scuba diving tour in the Bahamas, one amazing type of mammal that you may have the chance to spot, is none other than the sperm whale. Sperm whales are easily recognizable with their large heads and rounded foreheads. There are many popular diving locations within the Bahamas where sperm whales can typically be spotted, both from the boat during transit and in-between dives. Some of these spots include Bimini, Andros, Grand Bahama and Nassau. If you are planning a scuba diving Bahamas excursion, learning a little bit about the sperm whale in advance may help you to spot one during your underwater adventure.

There are many different whale species, one of the most recognizable being the sperm whale. Known for their massive heads which distinguishes them from other whale species, the sperm whale is believed to have the largest brain out of any creature that has ever lived on Earth. While many think that the sperm whale's name has a different type of meaning, it is actually evolved from the substance known as spermaceti which can be found in the sperm whale's head. Other distinguishing features of the sperm whale include their extremely large teeth. When it comes to their size, they may grow anywhere from 15 to 18 meters, or 59 feet! They also typically weigh-in at 35 to 45 tons with male sperm whales being almost three times larger than mature female sperm whales. These beautiful mammals that you may encounter during your dive in the Bahamas have an expected lifespan of more than 70 years.

The sperm whale is one of the deepest diving mammals, commonly diving down beneath the waters surface at 1,300 feet. However, they are able to dive much further if needed, going up to two miles beneath the surface. During their dives, sperm whales are able to find a wide variety of creatures that lurk down below. These are actually strange variations of creatures that are widely found within the ocean's shallow waters. Creatures known as cephalopods make up most of the sperm whale's diet. This includes octopus, squid and cuttlefish. Sperm whales also hunt for giant and colossal squids to eat, which are the largest invertebrates in the world and are known for their deadly tentacles. In order to thrive, sperm whales consume over one ton of food on a daily basis.

Female sperm whales and their calves usually stay within tropical and subtropical waters throughout the entire year. This makes the Bahamas the prime spot to view sperm whales during scuba diving trips. Male sperm whales make their way to higher latitudes and then head back to the equator and tropical waters when it is time to breed. It is common to see these whales in groups of up to 20 mammals, also known as pods, while males may be spotted traveling alone, with a few other companions, or may also move from one group to another.