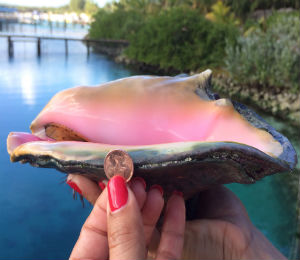 For those who choose to go, when scuba diving Bahamas guides are skilled in providing a great experience for novices and experienced divers alike. The many sea creatures and beautiful waters surrounding the Bahamas make it easy. Though there are many larger animals such as dolphins and sharks that can be spotted in the area, there are also some quiet favorites that many divers enjoy finding. The Bahamas conch fits into this latter category.

The most eye-catching thing about this particular marine animal is actually its elaborate shell. It is basically a large sea snail, and without its shell its appearance is fairly unprepossessing. It has two pairs of stalks on its head, one which hosts its eyes and one which is instead used to smell and touch.

The shell, however, is beautiful. The color of the inside of the shell, which can be seen near the flaring lip, is a translucent pink. The outside of the shell varies greatly from conch to conch. It's usually a dusty yellow color but can be covered in algae and other sea life, making each one unique. One end of the shell spirals into a point, and there are turrets, ridges and spikes all across the outside of a conch shell. Conchs can occasionally form pearls, which are usually the same light pink color as the inside of their shells.

Conchs can live for several decades, and their age can be somewhat determined by their shell. The older they are, the thicker the lip of their shell will be. A large Bahamas conch may reach about a foot long and weigh around five pounds, but many conchs are also smaller than that. They reach their full adult growth at about 3 to 4 years of age, and after that its shell starts to thicken. Very young conch, in addition to being smaller, also have a different colored shell, as their shells are white when they are first being formed.

Bahamas conch, or Queen conch, are herbivores and like to eat algae and seagrass. Baby conchs hunt at night, as they do not yet have a strong enough shell to withstand most predators. In fact, conch spend most of their time hiding under sand until they are about a year old. Certain other species of conchs, including the horse conch, will also eat live prey, including other sea snails.

Conchs can mainly be found in the warm waters of the Gulf of Mexico and the Caribbean Sea. They can also be found near the northeastern coast of South America, as far south as northern Brazil. Conchs prefers shallow waters and generally lives on the seagrass beds or sandy bottoms where they can easily graze. They can often be found near coral reefs, though they usually stays on the ground beneath them rather than climbing up into them. In Florida they are a protected species and cannot be fished or captured.