The History of the Diving Bell 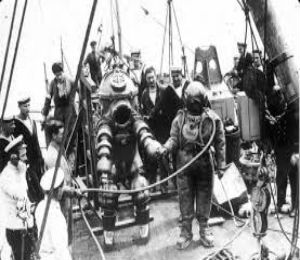 When looking to learn about the history of the scuba dive Bahamas locals are a good source of information. Some of the most beautiful diving sites on the planet can be found in that area of the world, and tourists and recreational divers take the plunge by the thousands. However, long before scuba diving was a leisure activity, various forms of diving were being developed all around the world for more serious reasons. The diving bell was one of the earliest inventions, and also one of the most ingenious in its simplicity.

Alexander the Great was one of the earliest known users of the diving bell, and is often credited with encouraging its invention. So named because it is only open at the bottom, it works by being lowered straight into the water in such a way that air is trapped in the container. This allows divers to swim into it and take replenishing breaths even while they are deep underwater. Aristotle, who was a teacher of Alexander the Great, wrote about this invention as early as 360 BC. Just a couple decades later, during the siege of Tyre in 332 BC, a glass diving bell was used by Alexander the Great to send divers down to destroy any underwater defenses the city maintained.

This is far from the only documented use of a diving bell in history. In 1531 AD a diving bell was used in an attempt to recover relics from a wrecked Roman ship in Lake Nemi, Italy. Though the budding archaeologists did more harm than good, a similar attempt about 300 years later in that same lake, in pursuit of the same wreck, once again utilized a diving bell.

It wasn't until comparatively recently that advances in the design were made. Dr. Edmund Halley, of Halley's Comet, added an air replenishing system in the 17th century. In the 18th century John Smeaton improved the design further by incorporating an air pump.

The US Navy Bureau of Construction and Repair in 1928 began to design a diving bell to be used in submarine rescue missions. This was due to earlier disasters where rescue was not possible. Called the McCann Submarine Rescue Chamber, it was first used to successfully rescue the crew of the Squalus in 1939.

Modern diving bells today can go as deep as 1000 feet underwater. They naturally adjust to the water pressure, with water levels in bells rising when deep underwater and lowering as the bell is raised to the surface. However, there are also diving bells where the pressure is kept at working depth level intentionally. This allows divers to be brought straight up out of the water, without having to ascend or descend in stages, and be decompressed in a decompression chamber on land.

When searching for the epicenter of the modern scuba dive Bahamas and places like it are what most divers imagine. However, the diving bell and other diving advances were made for much less relaxing reasons than admiring sea life. Whether used for military reasons, farming, or search and rescue missions, the diving bell has a long and interesting history.